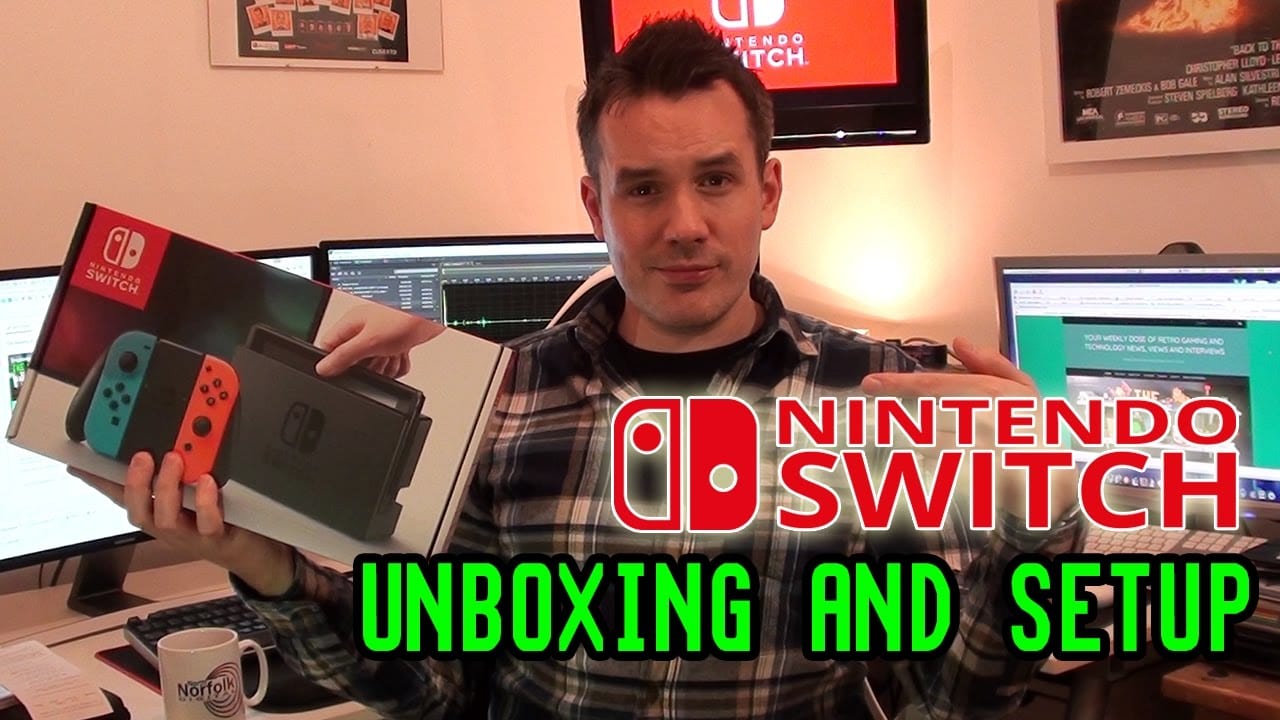 Wonder how Nintendo Switch looks like? How the controllers looks like and how the system looks? Then our friend from kookytech.net have made an excellent video on how the system looks like and how it plays. Dan Wood (which is also the host of the popular The Retro Hour podcast), looks at Nintendo Shield and explains it in a really profesionally way. So here its a Unboxing, Setup and First Impressions of Nintendo Switch Extravaganza for sure! Read on…

Not the first Console from legendary console manufacture Nintendo

Nintendo Switch is the latest console, from Nintendo in Japan. It is a console that is perfectly made for home and on the run or for the kids playing in the backseat of a car. This console combines two world’s into one and it really shows what Nintento in Japan wanted to do. They wanted to include everyone in the family and thats not a bad thing. Here Dan Wood is looking at newest Nintendo console and you get a glimpse on how it is to hook it up to a monitor, how the dock is working and how the controls is attatched or de-tatched from the screen etc.

With not satisfied sales from their previous console named as Nintendo Wii U. Now, Nintendo focuses on the whole family. They even made sure that since they decided to go back using catridges or specific memcards for the games, rather a DVD or bluray. These small Nintendo Switch made memcards have got an awful taste and Dan Wood is also tasting how they taste in this video.

Here IGN looks at Zelda: Breath of the Wild in 90 Minutes

Zelda: Breath of the Wild is a selling hit for Nintendo Switch with some Minor Issues

This unboxing and setup of Nintendo Switch video is now a few weeks old video, but Dan Wood is great at explaining everything related to this for you. So I felt its worth sharing it in a article like this about this console. Here is also playing a Bomberman version for the console, but the biggest game that people waited for was Zelda for the console. And now, Zelda is out and its really showing the popularity that Nintendo can have and that they are fully capable of competing against the mighty competitors at Sony and Microsoft. Just look at this headline on CNBC Website on-line:

Now that’s pretty stunning and sales figures that Nintendo needs. This was written back on 9th of March 2017, while now we have reached April month already by a few days. Nintendo now seems to have issues with the stocks of Nintendo Switch, that is written about on express.co.uk website. The game is also released for Nintendo Wii U, so gamers seems to actually choose that console instead if they don’t find a Nintendo Switch on the sales in United Kingdom. This seems to be a dilemma for Nintendo, but if there are real Nintendo fans they will get both new Zelda for Nintendo Wii U and Nintendo Switch! It’s great to see Zelda selling so much and let’s hope that Nintendo will fix the stock problems of the console. Dan Wood seemed to have no issues getting a Nintendo Switch console back in March though, but when a popular figure is outselling the console some days later. It shows how much power Nintendos icons do have over its own company, its fans and the sales itself.

Personally we think that releasing this game also for Nintendo Wii U, which ain’t that bad console compared to Nintendo Switch is a flaw, but on the other side. Its good that Nintendo tries to help the Nintendo Wii U sales. Let’s hope to see many more quality games for their consoles. They are a respected company worldwide and it’s nice to see Nintendo Switch got so much popularity that it got sold out issues. I guess this is just a temporary issue and that Nintendo understands that they need to fix this issue.