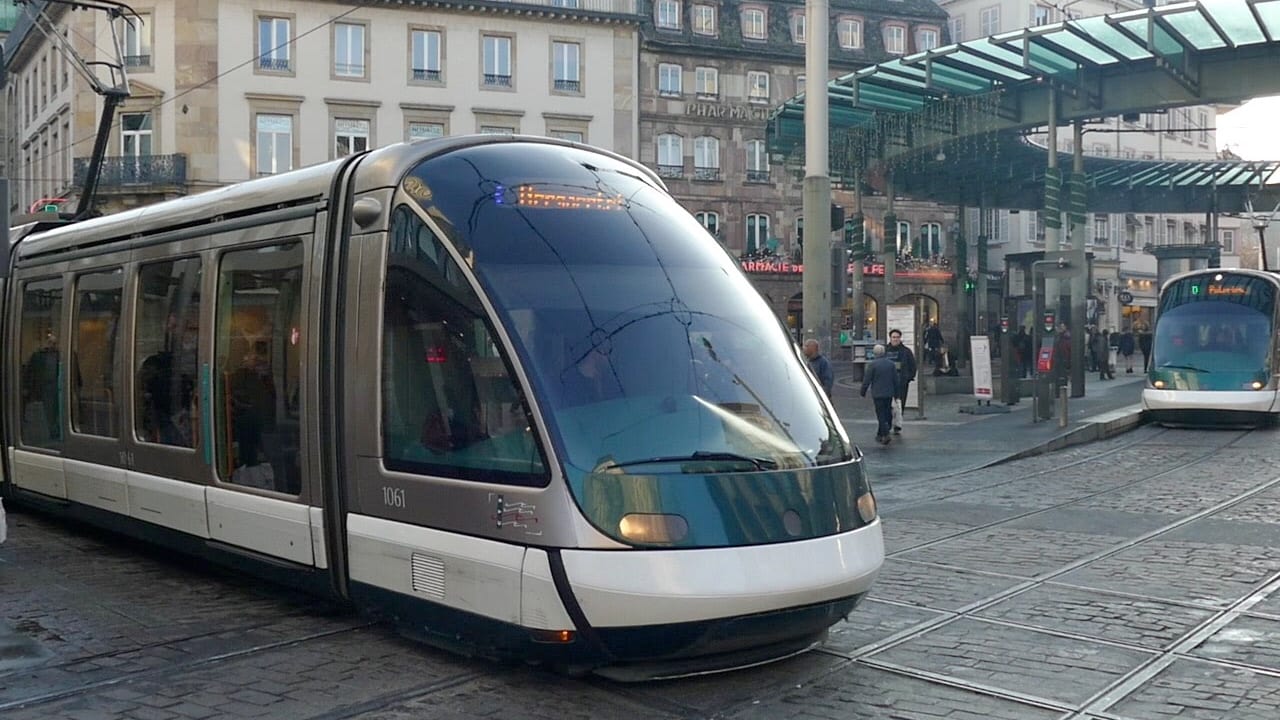 Strasbourg is one of those towns in France that is just awesome to visit if you love public transportation. The town got one of world’s most stylish trams out there, that reaches almost all 275.000 that lives in the town. But it doesn’t stop there! The network now reaches places beyond it’s city borders, and since 29th of April 2017 it also crosses the border to Germany. Read on!…

Take the tram to Germany with the stylish trams in Strasbourg

Now you can take the Tram from Strasbourg which is in France to Kehl Bahnhof which is on the other side of Rhin (Rhein) river, that actually divides these two countries. With tram line D that runs from Poteries, thru the tunnel under the Strasbourg Central station which is the only underground station on the network, then it runs down to Etoile Polygone and finally after Pord du Rhin station, the tram now crosses a bridge over Rhin (Rhein) river and then ends at Kehl Bahnhof in Germany.

Yes, you can take the train that runs directly from Strasbourg Central in France to Kehl Bahnhof station in Germany, but is that fun!? But this is still not the end of the expansion! A further extension to Kehl Rathaus is planned to be opened by the end of 2017. The full extension will include new stops in Germany. Remarkable co-operation for sure between these two countries.

FRANCE: April 29 marked the start of tram services from Strasbourg into Germany, following a ceremony the previous day with French and German officials.

German Chancellery Chief of Staff Peter Altmaier called the start of services ‘an especially important, perhaps historic event’, and praised the co-operation between the two countries, as well as the role of the EU.

Operator CTS signed a framework contract with Alstom in November 2014 for up to 50 trams. The 12 trams from the base order are now in service on Line D and Line A, which was extended a year ago. Earlier this year CTS exercised an option for a further 10 trams.

Alstom also installed overhead wires for the Line D extension, and was responsible for laying 300 m of track on the Rhine Bridge. Metro-Report.com

Tram map of Line D that takes you to Germany

The Strasbourg tramway is run by company named as CTS. The town consists of 6 differnt lines. They have letters instead of numbers, so they are named A, B, C, D, E and F. The town is regarded as a remarkable example of the tramway’s rebirth in the 1990s. After it, lot’s of French cities gave the tramway’s quite a rebirth in the country.

To visit the European Parlament building, you need to take Line E to reach it.

It’s really nice to see trams news from Strasbourg, since its a city that started the trend. Also this is a fantastic news showing how connected European cities are that lets such services crosses borders. There are also such systems in Bern, Switzerland and UBB Baderbahn that runs a local train service on Usedom where the Polish town Swinoujscie is it’s last stop.