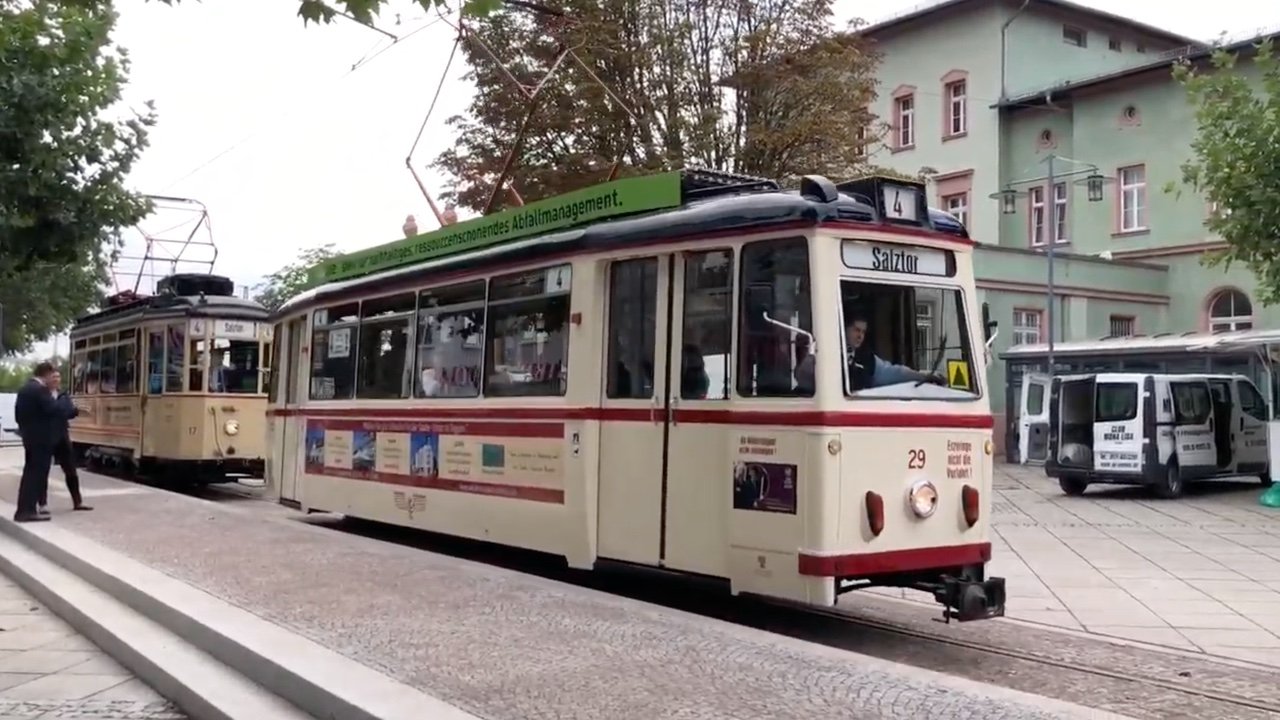 In Naumburg, a city located in the heart of the previous part of former East-Germany. The city loves its vintage streetcars or trams that run on their streets. The city is very small with only about 30,000 inhabitants and still, it got a tramway line through the city. Naumburg is located in the state of Saxony-Anhalt and can be found in-between Leipzig and Erfurt.

When I saw this news, my heart melted. Because not so many cities focus on vintage trams anymore. But Naumburg does. I have written before about the tram in Gmunden. A city that is located in Austria, but now the historic tram line there is a totally new light rail line that runs through many villages including Gmunden. Naumburg however has focused on staying vintage, which is pretty awesome.

Even though the trams are old, the speed is quite good. Ohh and the sounds it gives cant be heard in newer trams. So, now you know why Lisbon, Porto, and Naumburg have chosen to keep their vintage trams. It ads a lot love to the city.

My German language isn’t the best, but what I understand from the news on mdr.de is that new historic streetcar vehicle is on the tram tracks of Naumburg. In addition, there is another financial injection from the country to make the road operation safer and faster in the future for the trams.

The “Wilde Zicke” can now pass through Naumburg with another historic tram. After successful decontamination and technical inspection, the “Gotha” type carriage number 38 will soon be used again in regular and special traffic. This was announced by the Ministry of Transport. It is all financed by more than 500,000 euros from the government in Germany. The government helped with paying around 170,000 euros for the refurbishment of the 1960 carriage. The means come from a supporting pot for technical monuments. With a further 160,000 euros, the information is being promoted as a result of the renewal of the access road and connecting the tram to the road depot. This should make the road operation safer and faster in the future.

Transport Minister Thomas Webel (CDU) said to mdr.de that the historic streetcar has developed more and more into a small attraction. Vintage trams are huge touristic magnets in any city that they run. According to the Ministry of Transport, the country has so far supported the association with a total of more than 500,000 euros. Keeping these old trams on the track seems to be important for Germans and that is really warming a tram enthusiast like me. Naumburg is now on my list of German cities that I want to visit.

Passenger numbers are rising in Naumburg

The “Wilde Zicke” is the name of the historic tram vehicle that has been on the road in Naumburg since 2007. This is mainly due to the association for the preservation of historic vehicles been very active there. Since then, the tram line in this town has been extended several times. Nevertheless, with its nine stops and a length of only 2.8 kilometers, it remains one of the shortest tram networks in Germany. It could have reached many other places in the town if they wanted. The more tram lines, the better.

Finally, the historic tramway in Naumburg was able to record rising passenger numbers. Due to this, the Burgenlandkreis, in agreement with the tramway company in the city and the city of Naumburg, last year commissioned an investigation into three so-called ring closure variants. The study is being conducted at the TU Braunschweig. The results are to be presented in the coming weeks. Every city with the same size of the population in the world should have a tram line. Many of these small cities have a higher population because the politicians in them ignore how effective trams can be. In certain areas smaller cities with no trams or metros have higher pollution level than the cities near them with such services.

Why should the smaller cities pollute? No reason. Just see what Naumburg does.