MorphOS 3.10 is Alive and it’s Out for All Supported PowerPC Hardware

There is something going on with the Amiga vibe around the world. Vampire is keeping up the updating cycle and now MorphOS Team follows that by releasing MorphOS 3.10 for the public. This is the biggest ever release by MorphOS Team, but at the same time its taken almost 3 years since the last MorphOS 3.9 came out.

After that MorphOS Team released a new SDK that got released last summer. So it’s really nice to see MorphOS Team manage to release MorphOS 3.10 finally on Sunday 25th of March 2018. Everyone in the Amiga community have been waiting for this release and I wonder if this release happened because of our article about nextgen AmigaOS halting the Amiga future. But that is something that we can just speculate on.

Finally it is here! Those which have bought their AmigaONE X5000 because of the MorphOS 3.10 news managed to spread around that MorphOS Team will be supporting A-EON’s newest PowerPC hardware that also runs AmigaOS 4 by Hyperion Entertainment. It is nice to see these two nextgen AmigaOS compatible operating systems on the same hardware again. Previously you can run both MorphOS and AmigaOS 4 on Pegasos II, SAM460, AmigaONE 500 and finally on AmigaONE X5000 too! Also it is available for Mac Mini G4, PowerMac G4, PowerMac G5, eMac G4, iBook G4 and also PowerBook G4. So MorphOS 3.10 should for sure be on Apple operating system list now even though its for the PowerPC Macs.

We recommend however that if you want a newyou get the AmigaONE X5000 motherboard only and build yourself one with one of the compatible graphics cards that MorphOS 3.10 supports.

A big MorphOS update that brings this nextgen AmigaOS forward

The MorphOS development team announce yesterday of immediate availability of MorphOS 3.10 for all of its platforms including AmigaONE X5000. This MorphOS 3.10 update presents one of the biggest updates in its history but it’s also taken almost 3 years so it’s a reason for that too. This brand new version with the odd but cool number 3.10 (not 4.0!) introduces support for AmigaOne X5000 complete systems which sold by Amedia Computer France.

MorphOS 3.10 also expands the general hardware compatibility for MorphOS users by adding numerous new drivers for graphics cards, scanners, network cards, SATA controllers, and even USB audio devices. There is also a update for OWB 1.24 that fixes issues and improves the layout all in all. Here is a screenshot of Albulus skin that is totally new with MorphOS 3.10 and a quick mix with

OWB 1.24 is still the browser, but there are some nice welcome improvementsl. GMail, YouTube and Facebook now works again for MorphOS users. SSL issues is fixed and the world is a bit closer for nextgen AmigaOS users.

Furthermore, MorphOS 3.10 brings Flow Studio to everyone for free that have bought MorphOS license. This is an integrated development environment that offers features such as a built-in source level debugger and seamless MorphOS shell access. MorphOS 3.10 is a massive update for sure for both developers and end-users. Now it’s time to rise the blue butterfly knowledge around the world.

Amitopia Amiga Magazine thinks that MorphOS Team needs to become much more active at giving people outside of the Amigaworld wanting or even interest to install and use MorphOS. On the PowerPC platform made by Apple, MorphOS 3.10 now shows who takes these old PowerPC machines seriously. MorphOS Team should use social-media and communicate way more with the community. Until now, the only way you can communicate with them is on Amiga Events. But as there is no blogs or any information regarding any activity around the development available it’s hard providing information about whats going on with MorphOS development.

In addition to many bug fixes and general performance improvements, MorphOS 3.10 also provides varied user interface and usability improvements. This release includes modern themes, new fonts, and support for vector graphics, such as SVG icons, as well as time zones via Coordinated Universal Time (UTC). They also improve the MorphOS GUI system which is called Magic User Interface and is very well known by Amigan’s.

By launching MUI5 for MorphOS (which isn’t compatible with the other MUI GUI development), MorphOS becomes even more stable and faster in usage.

This is pretty neat. The whole system looks way more modern and is now a quite sexy looking nextgen AmigaOS compatible operating system.


As usual, existing MorphOS users can update to the latest release entirely for free while new ones needs to purchase it. What’s nice with MorphOS is the very rare updates that needs to be paid for after your purchase. However, MorphOS Team should have made it much easier to pay or donate.

Amitopia thinks its important for new users reading how to install. Especially people changing from MacOSX.  We advice you to read MorphOS Team installation and troubleshooting guides before you attempt to install MorphOS for the first time. Existing users can upgrade via the familiar procedure but are encouraged to read the guides as well. MorphOS 3.10 is available for download in their files section. 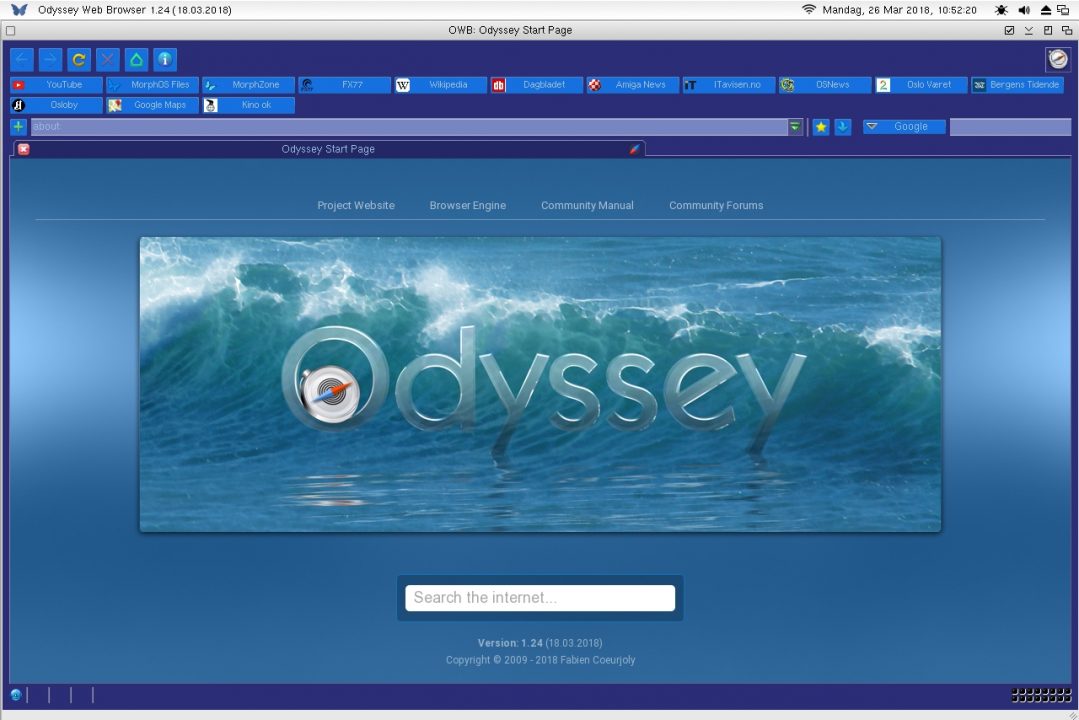 All of these computers got PowerPC. MorphOS however requires ATI Radeon cards to work. Some of the ATI Radeon cards used by AmigaOS 4 isn’t working still though.  Radeon Southern Island cards series doesn’t. So, if you have bought AmigaONE X5000 with the HD7700 series video cards. MorphOS 3.10 are not compatible with it. For everyone else, this release should be a painless installation.

Finally it is out.. and now we at Amitopia Amiga Magazine hopes that MorphOS Team will improve their update cycle. Also MorphOS Team needs to become way more available on social media and at other places. Promoting this fantastic operating system is almost none existent! Anyway. Thanks to the whole MorphOS Team for delivering it finally. Something is going on and that’s a Great thing! The introduction screen with First Flight image and the music playing is Awesome as shown on the image below. The feeling when updating to MorphOS 3.10 is great. This is a great nextgen AmigaOS compatible operating system. Kudos! 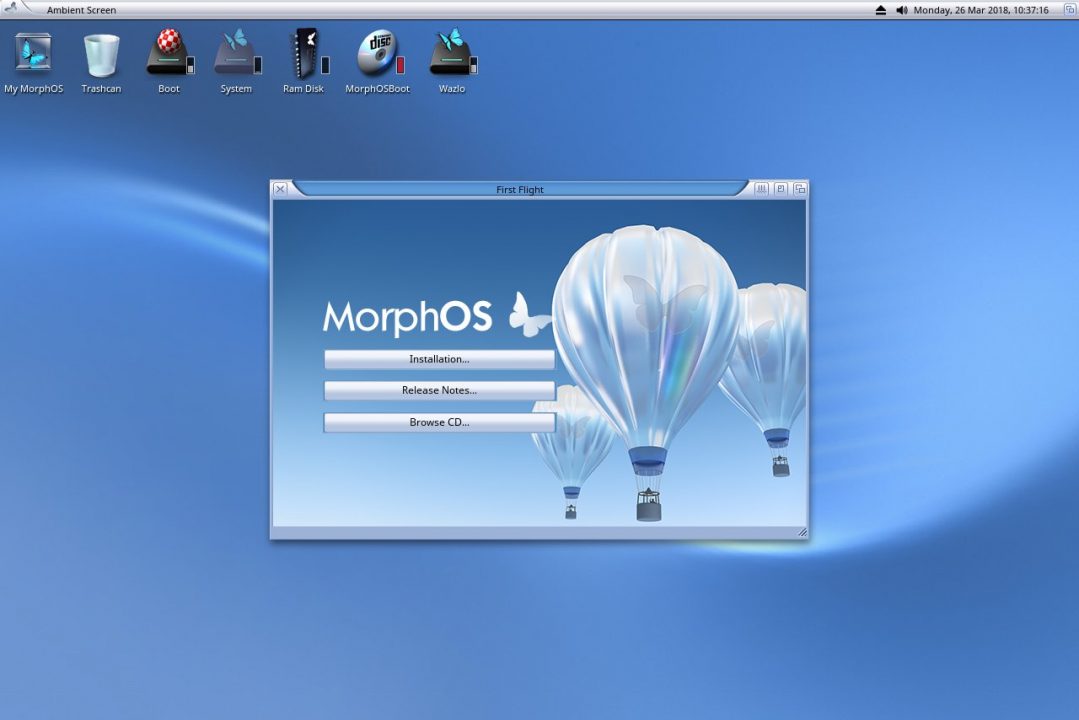 Ads
2018-03-27
Previous Post: Siemens Light Rail wagons will be running in Copenhagen, Denmark from 2024
Next Post: 5 reasons to visit Rome this year