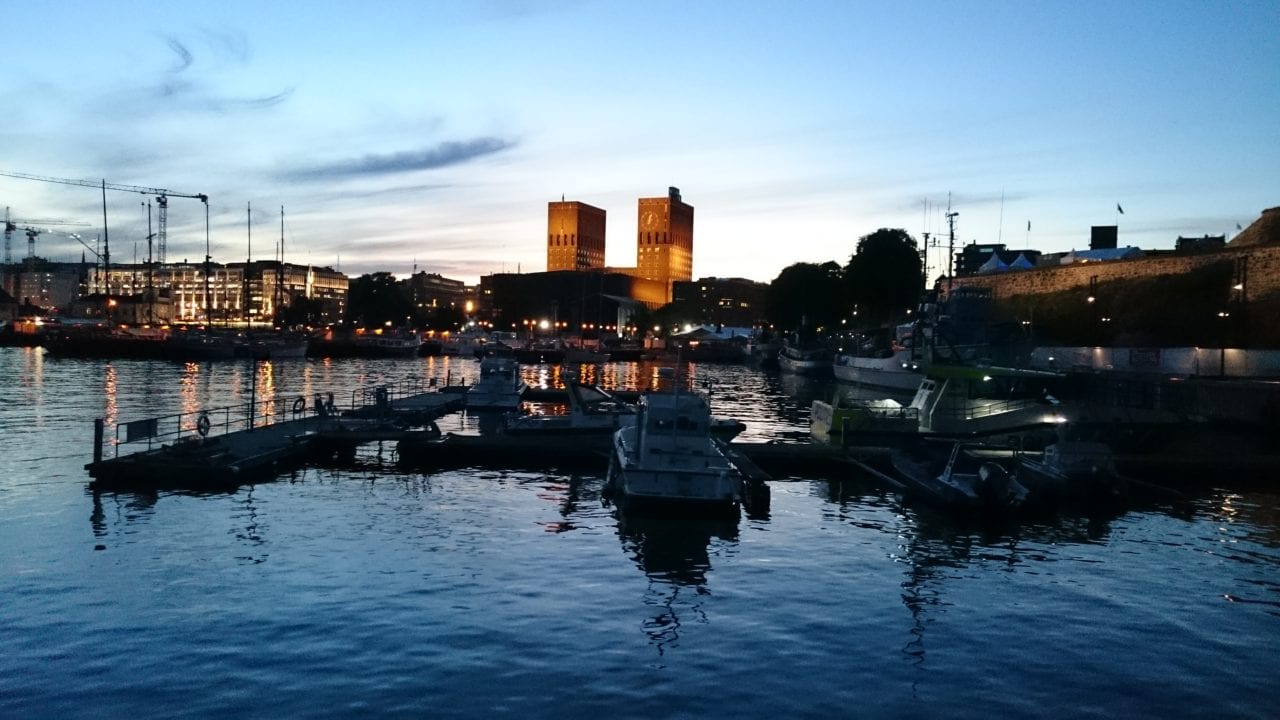 Oslo on the Longest day of the Year 2016

As Distrita’s main office is in Oslo, I’ve choose to share some pictures that I took when biking around in Oslo from about 23.30 to 01.00 in the night. All of the Nordic countries experiences long days like this, but further north the sun even stays above the horizon even during the night also. In Oslo we only experience so called “white nights”.

With this picture, I wanted to show how nice the contrasts can be over Norways largest train station for passangers. From here you can take trains to almost all destinations in Norway. Goto www.nsb.no for more information.

Here I wanted to show you a new area that have just recently been opened for public. Oslo is under heavy construction these days and bringing the Akerselva river back to daylight for people have been one of the priorites. Nice colors on the water fall and extravagnt bushes made me want to take this photo with Oslo’s largest sky scraper in the background. In Oslo that building is known as Oslo Plaza, but now it is part of Blu Radisson Hotels.

With Oslo changing all the time, I wanted to show you Dronning Eufemias gate. A street that have replaced a really heavy highway and a well known roundabout in Oslo. Now its a avenue street with tramtracks in the middle that won’t be used for many more months due to a train tunnel project.

This was Oslo’s first ever building in the area. Now the whole area is under development. When it came, and even now its stands out towards the sea. You can walk on the roof and it is for free. So, bring your friend, your love or just have a walk of mind onto it and its actually quite refreshing and relaxing.

Moon mirror in the Water

I just had to take this photo when I saw the moon reflecting itself in the ocean. But I also knew the risk by taking it with my Sony Xperia Z3 mobile. Here I wanted to show the “white night” light as I point the camera away from the sunlight.

Here I captured a picture showing how strong the sunlight during the night can actually be in Oslo. The sun is just below the horizon and will again show itself more and more again from 2.30. At around 4.30 its sunshine again if its clear sky that is.

I hope that you enjoyed reading this article about our Longest day of the year Experience 2016. So, from today until 21st of December our days will get shorter and shorter. However, the real nights experience wont be seen until end of July here in Oslo and in the northern part of Nordic countries, Russia, Canada and even USA (Alaska) later. But even if there is sunshine or sunlight 24 hours a day, that doesn’t mean that the days are warmer. So if you want to come to the northern part of the world, be sure to check the weather and bring clothes in case of weather change. Because it happens often over here.

Have a nice summer or winter down below! And continue supporting and contributing. Distrita loves everyone of you who reads and shares our articles with the world. Together we can give the world Independent News from people all over the world.