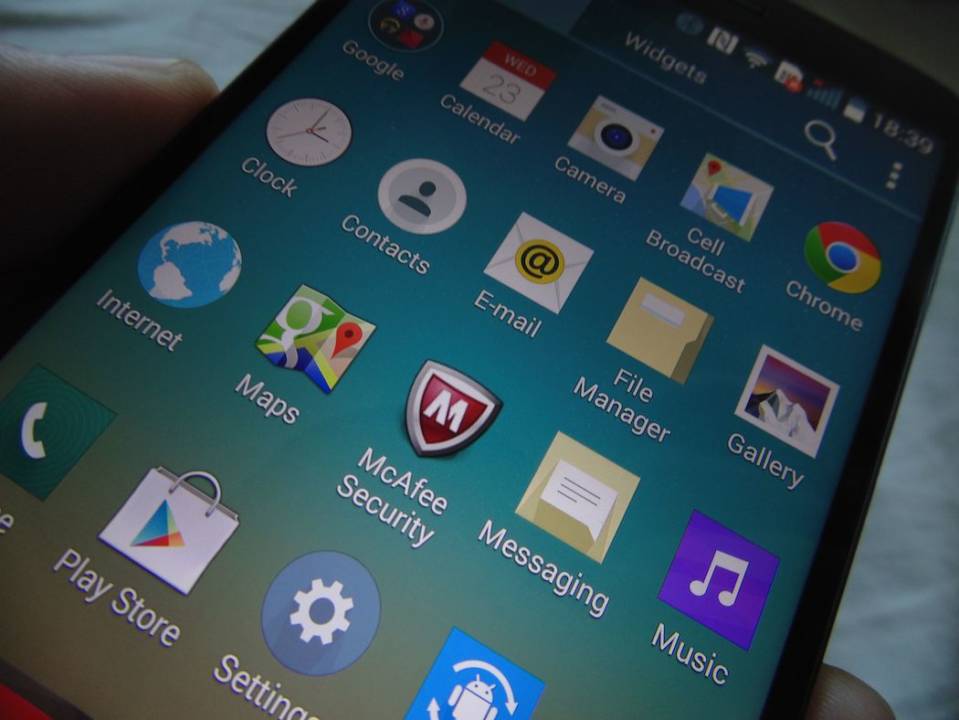 First we need to send a big thanks to LG which actually sent us a LG G3 phone for testing. Second we must say even in the start, that this review is based on our reactions and views of the phone.

Getting it out of the box:
The mobile box is simply a usual mobile box which looks nice. After getting it out, to start up the phone is no problem as the phone is already charged a bit. The power button is on the backside though, so this is a bit unusual, but I will get back to this feature of the phone later.

Already when you have turned the LG G3 device on, the screen itself is just mind-blowing good. This is awesome LG. Distrita haven’t seen a better screen for a phone and we thought that LG G2 had a great screen! The screen is a true HD-IPS + LCD capacitive touchscreen, 16M colors which got a screenmode size of 1440 x 2560 pixels. Awesome!

Using the phone:
Android OS, v4.4.2 comes with the phone, so its pretty much up to date. Using it is very good for the touching part of it, but something must be said about the power and volume buttons. LG have put them on the backside. Same as on LG G2. This is a nice thing for people with big pockets, but for people with small pockets it is quite unpleasant. The phone manages to turn itself on and off many times. Both Trond and me (Michal Bergseth) have tested this quite intense. It’s very annoying to be honest. You can risk to send or call someone without knowing it. The power button should have been put on the side of the phone we think. Also when in Camera mode, the volume buttons on the back can be used for taking pictures instead of touching the screen. The other problem here is that if you want to touch the camera button which goes up, you will automatic hold your hand over the camera lence which makes it impossible to take a good picture.

Another flaw with the phone is the material used back of the phone. When it gets hot and now when I am writing its 32C here in Oslo. The backside of the phone becomes quite slippery, which is a bit negative regarding that the phone can be slipped into the ground for no reasons. Broken mobile glass is very not nice to have!

If you are a type of person which can get used to all sorts of different mobiles and gadgets, this will be love from the first sight, but if you are not. Then this phone can result into cash loss because of repairs.

The camera for photo and video:
This must be one of the strongest points of the phone. For the price that this phone costs, you get a lot! The camera is just mind-blowing. The clear screen makes everything look sharp! When taking photo, the phone got 13 MP, 4160 x 3120 pixels, phase detection/laser autofocus, optical image stabilization, dual-LED (dual tone) flash
camera. For video its [email protected], [email protected], optical stabilization, HDR and stereo sound recording. This is good, but the recording microphone could have been a bit better. Its not optimal.

See the video that Distrita have made with LG G3 phone:

Listening to music:
This part of the phone is ok, but for the price of this phone. This should have been much better. Especially the internal speaker. This is nothing compared to Nokia E90 which is so much older, but still is the king of all mobiles regarding the sound. Here Distrita would recommend a cheap GoPro camera for sound and action. This is missing on this awesome phone!

This phone deserves so many red circles just because of the screen, video and because of its incredible camera! For normal usage it is great and it can multitask by having two programs running on the same screen at once. The biggest advice from us is that if you want to buy this phone, be sure to get a protection fast as possible. That will help the phone for sure to be alive more than few days. If you are the type of person which is good at holding your phones, you should also get a protection just to be safe. It’s incredibly stupid to loze 5000,- NOK for sure!

If you want to see more pictures of the phone and the pictures which is taken by it. Go ahead to our LG G3 Gallery page. The photos of LG G3 is taken with Sony DSC-H200 camera.