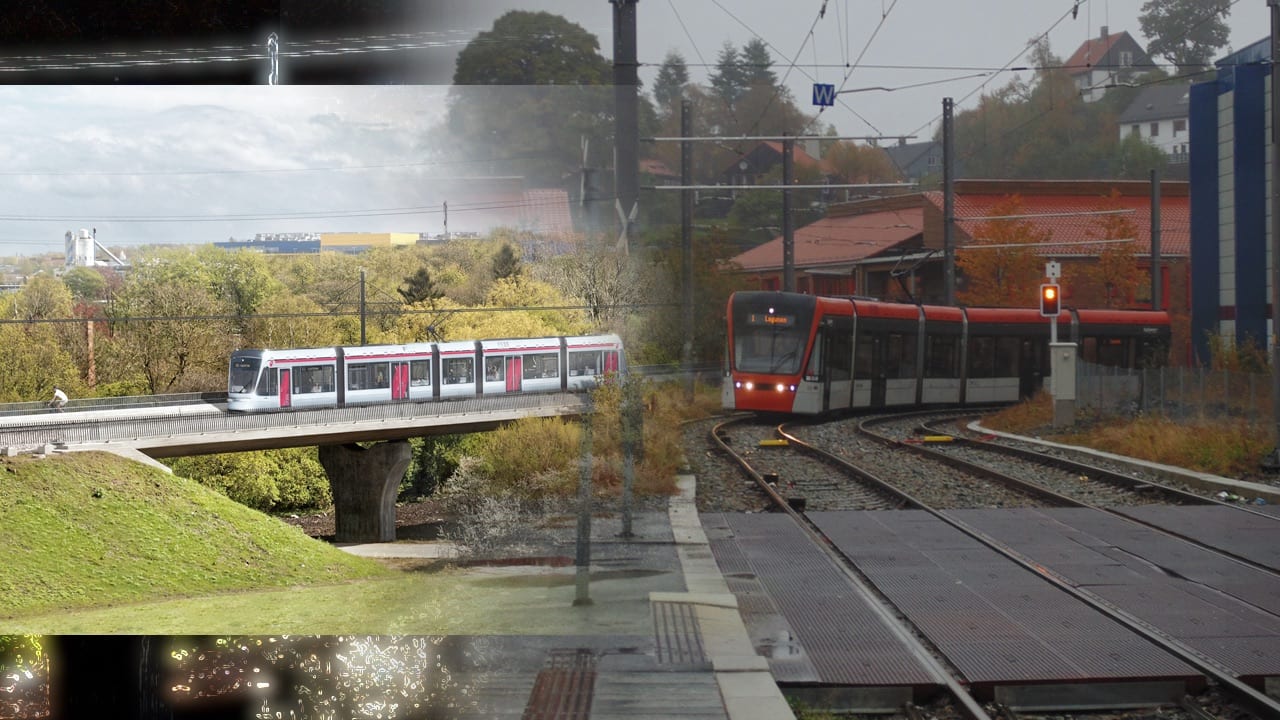 Scandinavia seems to be into a tram boost for sure. Here we look at the towns having or getting new transit systems. Bergen is one of them. It is the second biggest city in Norway with around 272000 inhabitants. After several years, Bergen got it’s tram back in 2010 named as ByBanen. With several extensions until now, the first line will end at the Bergen Airport. Yes, soon in 2017 you can take the tram all the way from Bergen Airport to the centre and Distrita is invited for that event. We hope to bring you lots of impressions and comments from it, when that happens. Read on for details until 2021 in Scandinavia.

A little city with aroun 256000 inhabitants. It sits near the Aarhus bugt, which is part of the Baltic Sea.  The city got boat connections with Sjælland where Copenhagen is. In 2013, the construction of tram in AArhus began, after seeing good results from Bergen in Norway. The 12km tram line is still under construction, but it will open during 2017. The tram wagons will be more powerful than the ones in Bergen, as some of the stretch it will use national railway tracks. This is a real LTR system rather. To be fair, it is a tram-train system.

A very small city in Sweden, with only 83000 inhabitants. Lund sits a bit north of Malmö, yet the politicians have choosen to go for correct transit system. Trams feels a lot more comfortable everywhere. It also pulls car traffic a bit away, which is great. The tram will link a university and Science Village in the town. The tram line will be around 5.5km long and it is expected to be completed by 2019.

A rather small city with only 170000 inhabitants in Denmark. The town is on Fyn island, between Sjælland island and the European mainland. The total length will be 14.5km long and connect with Odense central train station. You will also be able to take the tram to IKEA in town.

This town sits in the middle of Finland and is the home of Nokia company that is known worldwide. The town around 220000 inhabitants. First phase of construction will start now in 2017, but this 15.5km long tram system is planned to open in 2021. On the day this tram system opens, Tampere will have 2 tram lines going from Pyynikintori, crossing Tampere central railway station and then to Vieritie or Hervantajärvi. Maybe it will reach Nokia someday!?

There is also future extensions planned for Bergen Tram in Norway, like a line to Sandviken. There is also huge debate that never ends if the trams should go over the touristic fish selling market in Bergen. Lund’s tram in Sweden is planned to be built further south to Staffanstorp and in Tampere , Finland there are plans for contstruction further west-north to Lentävänniemi. There was also talks about getting Stavanger a tram system, but the politicians seems to have lost the sense and dont know what they want anymore. In Trondheim, Norway there was plans to extend the brilliant tram system that they have but instead busses will pull up dust into the air. Trondheim is bigger than both Lund in Sweden and Odense in Denmark. Yet, the politicians keeps on giving the beautiful nature a reason to cry. Trams are the way to go if you want to get ridd of traffic. Just look at Bergen! Bybanen have got people to actually use a transport system that is enviroment friendly. Now Aarhus is the next Scandinavian country to get a new tram system, which is heavily based on the Bergen Tram but they manage to take it even further.