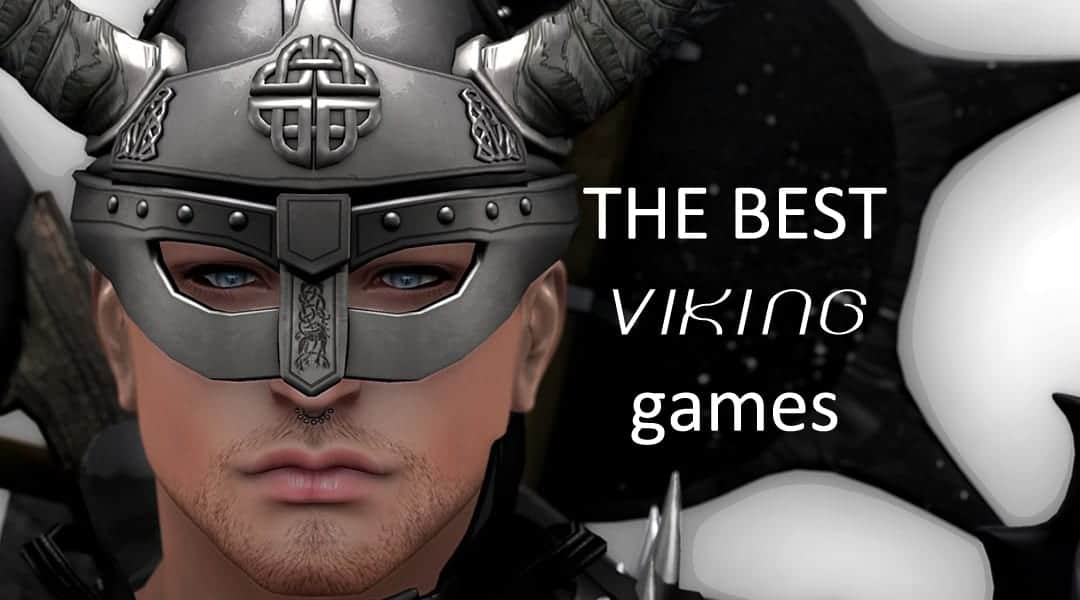 If you love Vikings and everything about the Vikings era, you should check out these nostalgic Retro Viking Games I have found here for you. In this article, you will find my personal Top 7 Best Viking Games for PC. Put on your horned helmet and prepare for war!

Are you looking for one of those Viking games that treat the mythology with a kind of delicate respect you see in a lot of indie games? Or one that cares about the Norse mythology?

Vikings have captivated our imagination for ages. This bloodthirsty conquering race has been featured in various films and Viking TV shows and everyone knows the traditional image of the tall Viking standing with his horned helmet and hammer. Viking games let you control swathes of angry warriors or epic Viking heroes and vie for power across various worlds.

Get into the Viking spirit and earn your place in Valhalla! Distrita collects 7 of the best viking games for PC.

Maybe you are interested in Gaelic and Norse history? With today’s technology, you could have one map in let’s say Gaelic Ireland and another in Norse Norway.

The political intrigue, betrayals, alliances, and wars of that era between the Irish and Norse are amazing.

You honestly have one of the greatest plethoras of downright mysterious, eccentric, interesting, and bloody Irish and Norse characters during that time running about, from the famous Irish High King Brian Boru, to his brother Wolf the Quarrelsome, and the Viking Brodir of Man (who literally acted like a Templar), Just great stuff all round.

The only problem is the lack of high-rise buildings, but Dublin was pretty built up in the Scandinavian style during the time so it’s not like there was nothing. But would be worth it alone for the great history and cast of characters.

I saw one of the main writers at Ubisoft likes the idea of the Irish War of Independence, but Irish vs British has been overdone in all forms of media. Irish and Norse have been barely touched on. Celts and Vikings in one game, sign me up lads.

About Volgarr the Viking:
Do you remember when games were tough? Return to the Golden Age of arcades with an all-NEW hardcore action experience that pulls no punches.

This is for sure one of the best Viking games out there. Volgarr the Viking possesses all the hallmarks of the true classics – simple controls, high challenge, and meticulous design – combined with hand-made pixel animation, an epic soundtrack, and buckets of blood.

Flex your gaming muscles and step into the arena with Volgarr the Viking. We dare you.

The game has these exciting features:

The Humble version of the game provides one DRM Free copy of the game + a Steam Key! Located here:
Volgarrtheviking.com

Multiplayer Online up to 32 Players: War of the Vikings

Its story takes place in EC 1937, two years after Valkyria Chronicles. The Principality of Gallia was able to repel a massive invasion by the Imperial Alliance, but at great cost to its infrastructure and military. While the Second Europan War rages on beyond its borders, Gallia struggles to rebuild itself.

The revelation that the ruling house of Gallia was actually a Darcsen bloodline has sent shockwaves throughout the nation.

A civil war has erupted as several anti-Darscen nobles unite under the banner of Count Gilbert Gassenarl and form the Gallian Revolutionary Army (colloquially known as “the Rebels”) to purge Darcsen influence from Gallia.

As the law of Universal Conscription forbids deployment of the Militia against internal strife, the government of Gallia is forced to deploy cadets from the prestigious Lanseal Royal Military Academy to help quell the Rebel threat.

The game is set in Europa, a fictional region loosely based on Europe during the early years of World War II. Because of its abundance of Ragnite ore, which takes the place of petroleum in the game setting, the neutral nation of Gallia comes under attack from the East Europan Imperial Alliance, which is itself engaged in war with the Atlantic Federation.

Players take control of a unit of the Gallian Militia, dedicated to repelling the invasion. The game’s visuals, which use Sega’s CANVAS graphics engine, resemble pencil-drawn paintings in motion.

What is it all about? Venture into Viking territory in Valhalla Chronicles, a 3D role-playing game that takes you on a mythological adventure filled with discovery, adventure, and raging wars. As one of four heroes, you must interact with humans and gods in order to complete your mission.

On your quest, you can take on the role of the fierce Grim, the catlike Tuva, the young Hymer, or the burly Thorgeir and encounter gods including Thor, Odin, and Loke–a half-god and half-giant. Source: Bluray

#4: King’s Bounty: Warriors of the North

King’s Bounty: Warriors of the North is the next chapter in the cult RPG/adventure saga.

The new tale takes place in the familiar world of Endoria featured in the previous games but begins in the Viking lands, which the celebrated hero Bill Gilbert never visited during his famous quest in King’s Bounty: The Legend.

This is my favorite game, mostly because of the amazing graphics and the cool music.

Source: How long to beat

The mighty Olaf, son of the King of Nordlig, has devoted himself to destroying the Undead armies which have flooded the Northern Lands. To free his frozen country of necromancers, Olaf will take his battle to the heart of Endoria, through underground Dwarven caves and across the legendary lands of the Vikings.

On a road beset with treacherous enemies and newfound friends, this is a quest destined to deliver the ultimate in fierce battles and exciting adventures.

Create your own Gaulish village with the help of Asterix, Obelix, Dogmatix, and a few villagers. Join a guild, make friends, and fight the Romans. Upgrade your village further and further to make even better items faster! Fight against other players in the boxing ring in a double or nothing PvP match.

Whatever you do, have fun and try to avoid the sky falling on your head.

Asterix and Friends is a resource management-style game incorporating the characters of the Asterix comic books! It went into open beta in June 2013 and has continued to release new content over time.

For Honor is an action fighting game set in a medieval and Viking fantasy setting. Players can play as a character like knights, samurai, and Vikings.

The knights speak classically and modified Latin, the Vikings speak Icelandic, and the samurai speak Japanese.

Those left behind were conquered by the Knights and assimilated into their cultures.

The Vikings returned in great numbers a few centuries ago. They came from far across the sea to where they have established a new homeland. They retuned for many reasons, but mostly to reclaim their ancient homeland in the North: Valkeinheim. Hundreds of Viking clans now coexist in relative peace in the frozen tundra. To the outside observer, however, they seem to exist in a state of perpetual civil war.

Vikings are the undisputed masters of the sea and fresh water. When this raucous nation gathers together in massive armadas of dragon-headed ships, they are fearsome to behold and nigh unstoppable.

For Honor is Ubisoft’s weird action/fighting/strategy game about knights vs. samurai vs. Vikings sounds like the most confusing mess in the world. But it actually kind of rocks.

And since it pays to really hone your skills with one faction, why not choose the stout Vikings?

Why watch this review of For Honor? Ubisoft’s brawler offers some of the best multiplayer action in recent memory with its deep and flexible melee combat.

Jotun tells the tale of Thora, a Viking shield maiden who falls from her boat during a voyage and drowns.

Because passage to Valhalla is only granted to those who fall in battle, Thora is given the chance to earn her way into the golden halls by finding and killing the Jotun, the Titans of Norse mythology.

This title follows the story of a Viking woman, Thora, who seeks to impress the gods and earn her way into Valhalla following an unremarkable and inglorious death.

Through its God Power system, the game makes reference to many of the familiar names and faces of Norse mythology, from Freyja to Thor, and even to some of the less well-known aspects of the old myths, like Idunn’s apples and Mimir’s Well.

The game’s hub is even called Ginnungagap, “The Void”, after the primordial expanse from which all life emerges in the creation myth of Norse pre-history. It’s a short play, but one that promises a veritable stroll through Norse mythology.

Why watch this review of Jotun?

Conclusion – which is your favorite Viking game?

Let us hear your opinion. Which of these 7 games are your favorite Viking games for pc? Do you have other Viking games that you find even more entertaining? Did you like this article? Please share it with your friends and leave us a comment. If you want to get into real Viking spirit, maybe you should visit a Viking festival in Northern Europe?

We want to say thanks to http://addurl.nu