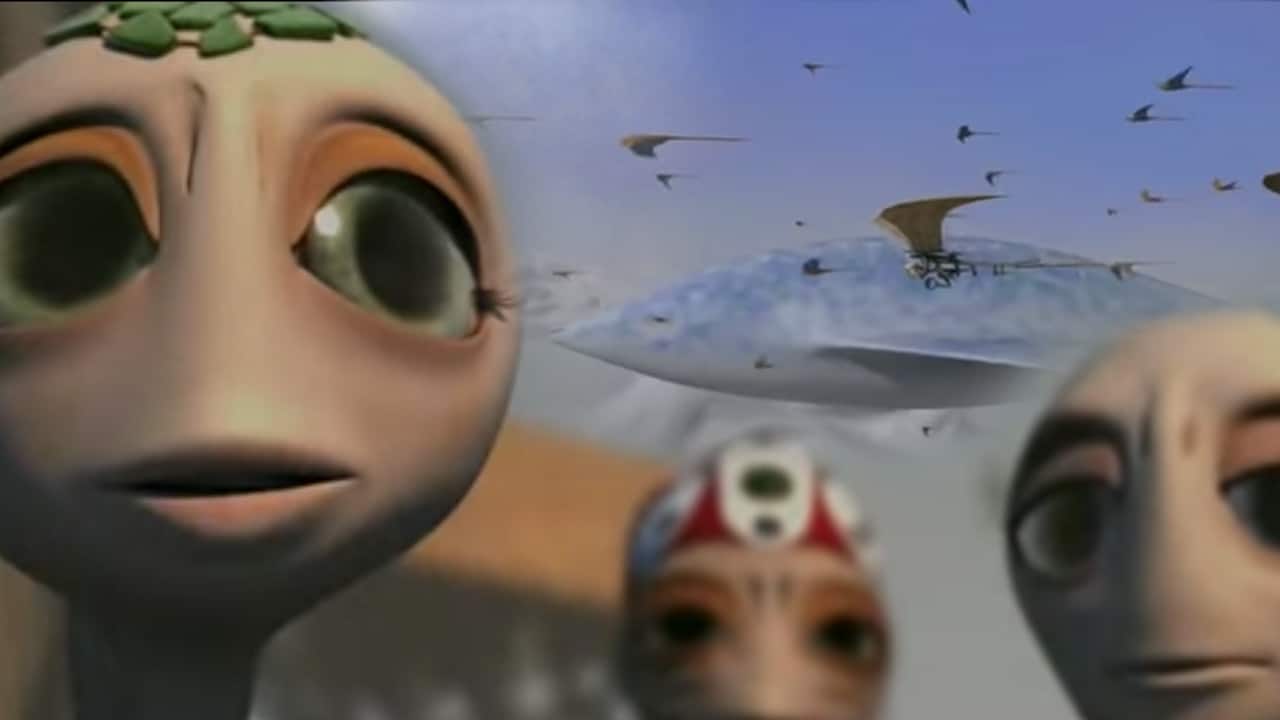 We at Distrita loves to invite into our world where we reveal underrated movies that we think deserve to be mentioned. This is Danny Glover’s fourth animated film after Antz (the very first 3D movie with in-depth story 1998), The Prince of Egypt (1998), and Barnyard (2006). And then in 2007, Battle for Terra was finally shown at the Toronto International Film Festival but it wasn’t shown at the worldwide cinemas until 2008.

Battle for Terra is a fully mindblowing experience to watch that too few people know anything about. It is so unique, so terrifying and at the same time very intelligent. This sci-fi animated movie from 2007 is on our top list to watch that is hardly mentioned anywhere.

I went to see “Battle For Terra” on its opening weekend here in Oslo, Norway in 2009. I have to admit I didn’t want to see it as much as I wanted to see other types of movies at that time but I wanted to watch an animated film on the big screen. Only 6 million saw it at the box office. It deserved much more. A lot more!

Battle for Terra is very Unique

Much to my surprise “Terra” is probably a much more mature, Involving & Emotional filmgoing experience than anything on the big screen right now before Alita Battle Angel came along. It might even bring a tear to some adult eyes out there. It depends on if you understand the story.

The Battle for Terra movie story tells the tale of the inhabitants of the planet Terra (By the way, That’s the name given to it by the humans. The planet is mentioned in the movie). They are kinda like large upright tadpoles who swim through their atmosphere. The “Swimming” animation is really spot on and something different for a film of this type.

The “Terrans” aren’t your usual cutesy alien creatures. There are no stereotypical characters in this movie. No “Goofy” alien, No “Evil” aliens, although the main alien protagonist “Mala” is very handy & invents things. For some minors, they can look a bit scary though but their eyes are so beautiful to look at.

A mysterious planet with a peaceful race

The Terrans on this mysterious planet are a peaceful race. These fish alike aliens seem to spend their days learning and studying their heritage. Their world is a wonderful amalgam of large mushroom-like trees that they live in & they even have gliders that they travel around in.

There is even large Whale like creatures that live in their atmosphere. These whales are all based on the documentaries released at that time where NASA astronauts describe how life could be on other planets in the universe. These huge whales on Terra can swim in this water alike air. You can also witness such a whale in the RPG game for Dreamcast called Skies Of Arcadia, but I won’t spoil that game for you.

Back to Battle for Terra movie! These huge whales are like the gigantic blue whales cruise through our oceans. All of them live in harmony. They are huge but not dangerous. A nice addon to this majestic sci-fi movie.

Humans try to destroy Terra by terraforming it

The peace on the planet is destroyed by people from earth arrive announcing that since they have devastated the resources on 3 planets and destroyed them in the process they have no choice but to “Terraform” the planet & change the atmosphere to suit what’s left of mankind. The fact that this would kill the peaceful Terrans is of little concern to humans.

Planet 51 which is almost identical, came out at the same time at the cinemas worldwide. But because of a much “funnier” setting. It won a lot more people’s hearts. Battle for Terra seemed to be a way too serious animated film for lots of minors to understand it.

I personally cannot go into the rest of the film without spoiling it but suffice it to say there is little to no humor in this film. That’s not to say that kids won’t enjoy it. They will if they are into the sci-fi genre. But this is not your typical kiddie flick.

Battle for Terra is a very Serious Political sci-fi movie

It is all about the important topics in life such as war, peace, Racism, Militarism and most of all love and harmony between those who might look at each other differently.

The animation is mostly superb from 2008. There are some really awesome scenes where you can feel like you’re there on the planet thanks to some good 3D visualization.

The 3D part of the movie got the depth perception of all of the 3D scenes shown. You feel often that you are in this world. There are a couple of scenes of snow falling that make you just want to stick your tongue out & catch a snowflake.

Great atmosphere in Battle for Terra

All of the voice performances are good to great & the film never lags. As a matter of fact, the battle scenes are quite rousing (Insert homage to George Lucas here) & while not graphic…characters do die in battle so you might want to keep an eye on the little ones if you’re with one of them.

The saddest part of the experience to people that have seen the movie is that at the cinemas (theatre) with a total 5-600 seater room. At many showings, there were exactly 4 people in there besides people arriving there.

At that time in 2008 the movies “Wolverine” & “Ghosts Of Girlfriends Past” steamrolled over this little gem and it pains me to think that people are missing out on a truly moving experience. It’ll be gone from theatres in a week and that’ll be it. I hope it finds it’s an audience on home video. It’s a good movie that deserves to be seen.

We at Distrita recommend it to anyone loving a deep sci-fi movie. It is animated but it is also an adult movie. It is for people that like Alita Battle Angel in many ways. Not the same movies but both are political types of movies. Showing that love and to unite differences is what people should do.