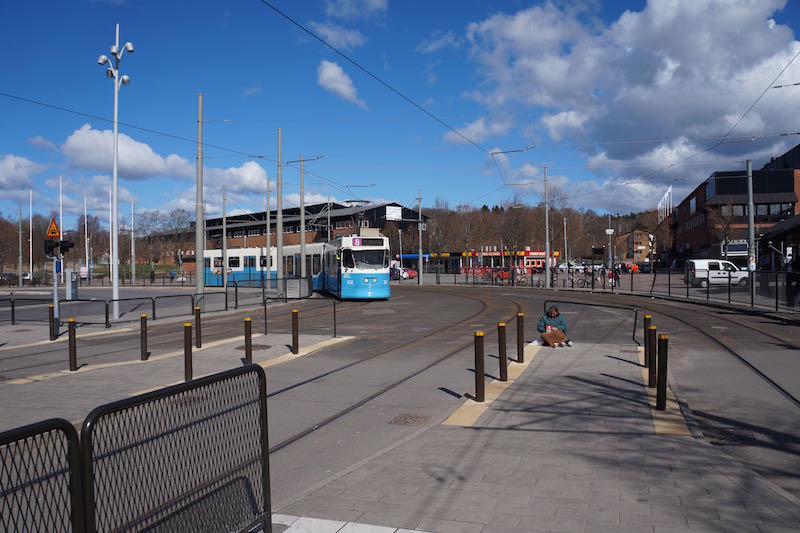 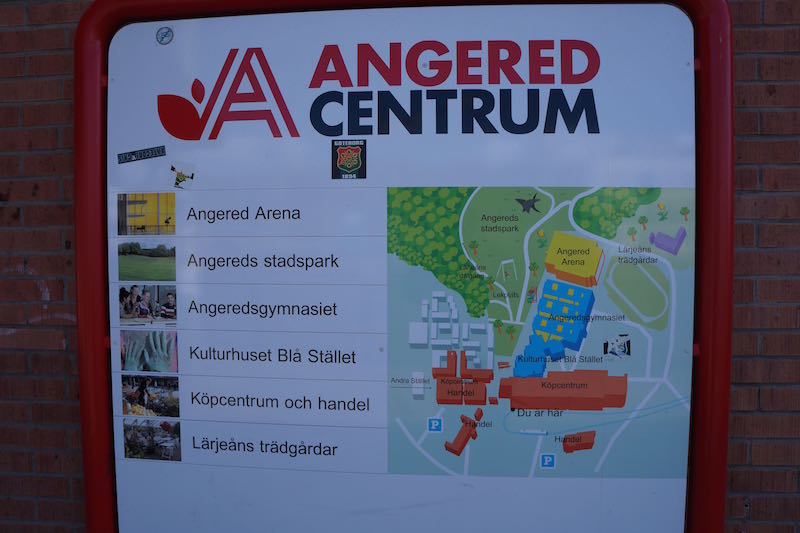 Back in 2015, our team visited the outskirts of Sweden’s second-biggest city Gothenburg. The city got around 500 000 people, and it sits on the west coast of Sweden. But most of the people that visit this town never visit Angered Centrum. This is mostly to Gothenburg authorities’ daily struggle to stop gang violence which is widely known in the media.

To reach Angered Centrum, you can reach it by taking the tram lines 4, 8 and 9. The last stop is saying Angered Centrum for the trams. Distrita wanted to see how life is here and the sight in Angered Centrum was a total shock to see! It was coming to another country.

Most of the People that visit Gothenburg do it because of seeing the beautiful city center. The town is also known for its huge amusement park that you find in the middle of the city that is called Liseberg. Gothenburg is also well known for its food that you can find at Saluhallen which is known for selling cheaper food. But Distrita which is interested in visiting unique districts in cities that we visit wanted to see some of the other sides of the town.

Angered Centrum is at the Outskirts of Gothenburg

We could have made yet another touristic article about how great Gothenburg is, but I choose to go somewhere else in this city and I decided to visit Angered Centrum outside of Gothenburg. The trip shocked me so much that I had to take photos and write about it.

Because of its location is quite far from the city center, the place is linked with 3 tram lines. These lines go normally from city central station for a while with tracks sharing space with train tracks. At some point (after several minutes), before Hjällbo station. The tracks swaps sides from right to left driving. I never thought that I would see something like this. 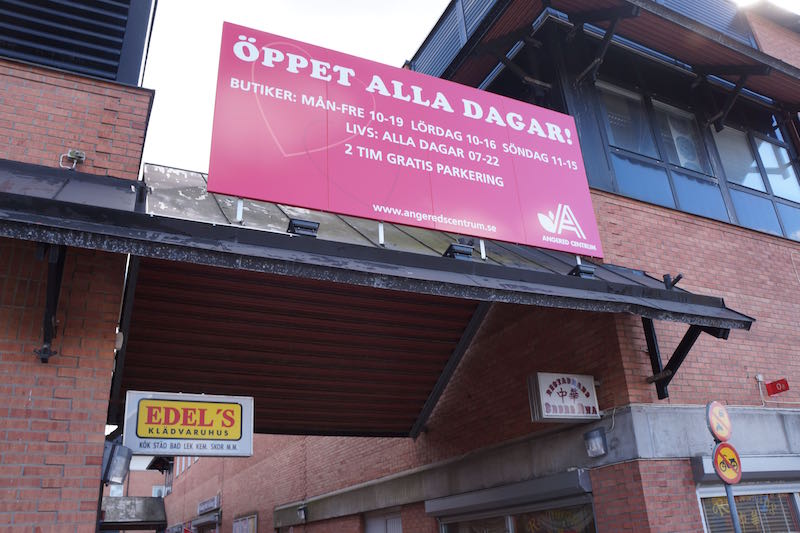 From station named Hjällbo to Angered Centrum, the tram also changes to become a metro, where all of the stations have bigger platforms and have the looks of metro stations instead of the tram station. On the route, there is even a station called Hammarkullen and this one is totally underground also.

It seems for me like the point just before Hjällbo where the tracks swaps left and right to Angered Centrum, is a place where mostly foreigners should stay. When I took the tram here, I noticed that 99% of all people on the tram had colored skin or talked Polish, Russian or even Chinese.

What can you see in Angered Centrum

When I entered this mysterious end station. I didn’t expect to find a shopping center that had so many Halal restaurants, Turkish delights stores, and Kebab places. I love to eat Kebabs here in Norway with Halal meat, so for me, it is not a problem eating this. I rather found this place interesting, because it had all of the world foods in one place. 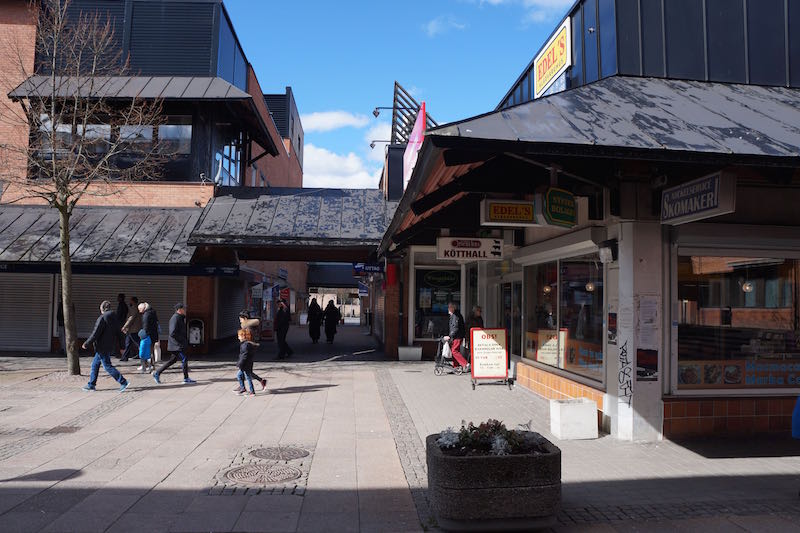 At the end of this shopping center, I found one ICA store and here I found some  Swedish people too. But mostly everywhere that was seen on the tour was foreigners. Most of them smiled back and even talked in a friendly way.

The shop owners gave us a good impression, but we left the area with several questions. We didn’t see foreigners in the city center when visiting Gothenburg! Why is Angered Centrum almost empty of Swedish people? Have the government in Sweden made this to a place so that foreigners and Swedish people should live so far apart from each other that it would reduce conflicts?

Here in Oslo, we also have some parts in the east of the town that has the ability to become ghetto alike places like in Gothenburg, Malmø or even Stockholm in Sweden. There are several violent happenings in these areas of the town. This violence includes shooting, drugs, knife stabbing, and killing are much more often happening here than in other places.

But here in Oslo, there are bigger forces that are working for making these areas better for the foreigners. I feel that Norway hasn’t done the same big mistakes as Sweden yet and I am glad for it. We love foreigners that comes to Scandinavia. Without them, this region of the world would be a very boring place to live in.

The worst thing that you can do is to put lots of foreigners who have traumas and bad experiences together. Because these kinds of people shows the negative living conditions in ghetto alike areas like Angered Centrum in Gothenburg.

We understand that these ghettos exist is because of the violence that has expanded through the years. Swedes move from them and let the foreigners live for themselves. But because of their previous experience in life. Most of this use violence as that’s the only language that they know. If there was a system that caught them, taught them and learned them to become parts of the Swedish society. It would help a lot.

Not all foreigners are bad people, but there are those people creating gangs that are not good for the societies in Scandinavia. Here we like to talk and not act before the talk. With several killings happening in Malmø. Gothenburg as a city should do something about it now before this also will happen in Angered Centrum or the nearby places around it. Invite more foreigners into the city itself. Talk to them. Provide them with knowledge. It will work as it is working in Oslo. 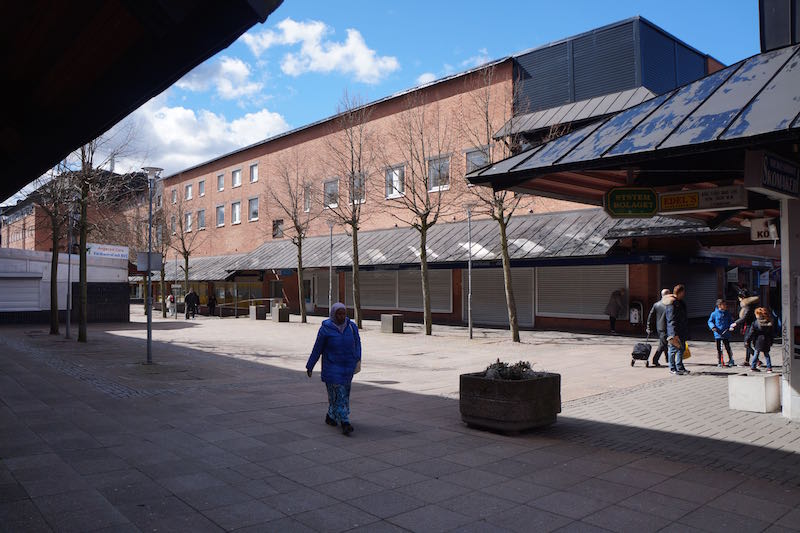 Distrita hopes that Sweden will try somehow to do a better job in putting their ghetto towns out of what they have become. I was really happy to go here and see with my own eyes that Angered Centrum has lots of potentials, but when so little Swedish people go here. Where is the integration then?

Have the politicians in Sweden ignored this? It seems so to me.