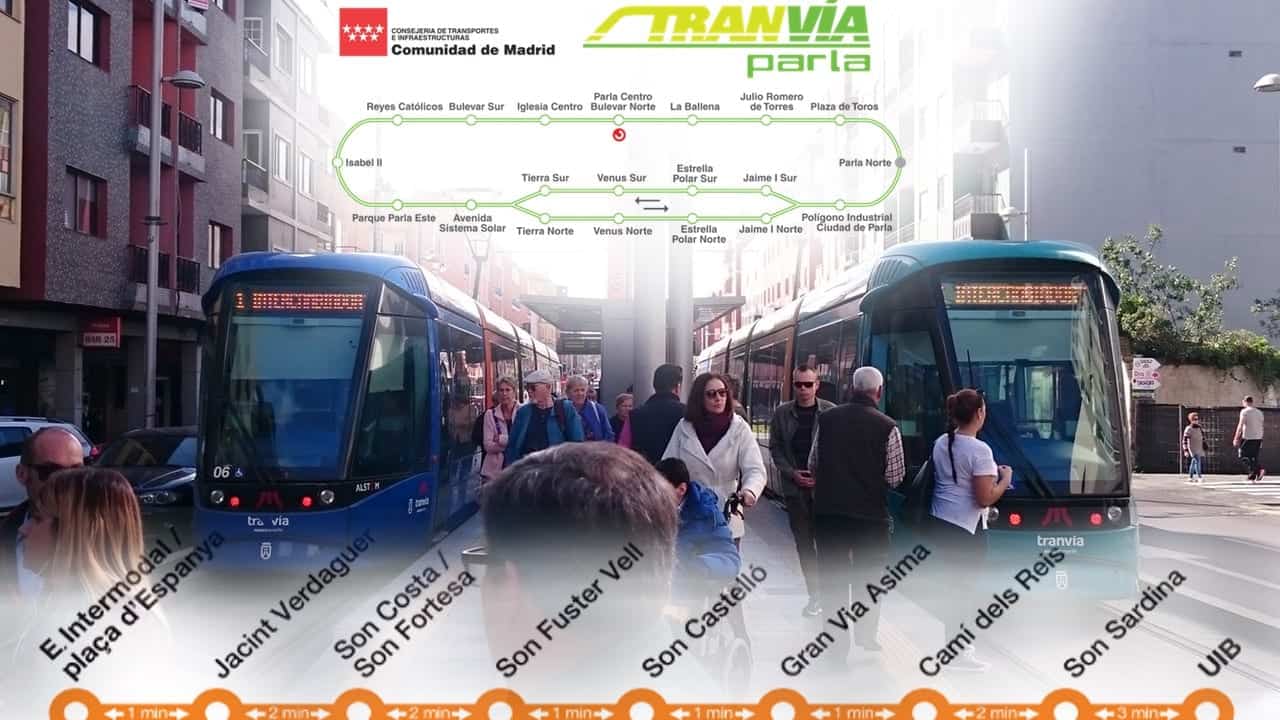 There are towns or places in Spain that many tourists like to visit that hides it’s transit options. Either they aren’t built as a tourist attraction or they simply goto places like Universities or other places not known for travelers. But in this little but interesting guide, we take a look at unknown transit systems in Spain. If you know of more interesting places.

Please write to us by using our Contact page if you know of more networks. But before you do that. Check out this list below first.

Palma de Mallorca got a Tiny Metro Network opened in 2007

In the Mediterranean sea beside Barcelona, there is a group of tropical islands that belongs to Spain and one of them is Mallorca. Here you find a city named Palma de Mallorca which with the surroundings got 401,270 in population. This city hides a Metro system that is quite new. For transit enthusiasts, this small but very new Metro system is a nice visit.

M1 is the real Metro line. In fact its a more underground line with only one station on the surface named Son Sardinia. This one is also linked with the train line that runs between Palma de Mallorca and Sóller which is the world’s oldest electrified train line.

It is really nice to see such a big city has Metro lines. But with so many people living in this city. This city should have many more transit possibilities. There is plans to expand the Metro Palma de Mallorca to Aeropuerto which is the main airport on Mallorca. Also, the main station is a bit hard to find if you don’t know Spanish.

T1 line is the tram line that connects the outskirts city La Laguna (La Trinidad) with Santa Cruz. Santa Cruz de Tenerife and La Laguna are two major Canary Islands cities in the northern parts of Tenerife with less touristic visitors and are a nice line to explore if you are looking for a more affordable experience.

This tram network on Tenerife consists of 2 tram lines. They are operated by MetroTenerife which runs both of the tram lines T1 and T2. 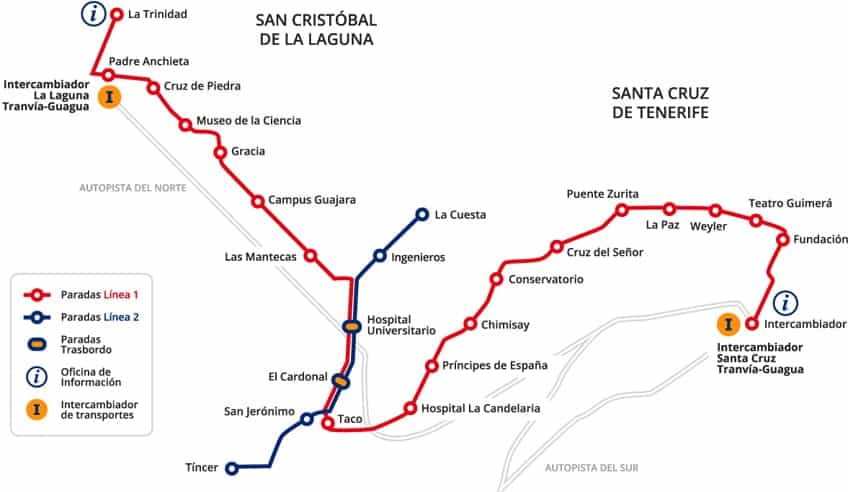 T1 line is the longest line, while the T2 line is a very short line. Both T1 and T2 lines meet at ElCardonal and Hospital Universitario stations. La Laguna can be reached by taking the T1 line which reaches La Trinidad station that is linked to La Laguna station. The Santa Cruz de Tenerife

By visiting this area of Tenerife, Distrita can guarantee that you will meet more locals than tourists. Distrita recommends you to visit these two towns and especially La Laguna! It’s a beauty! This is a very beautiful Canary Islands city up in the mountains of Tenerife island. It sits not that far from the northern airport on the island also, but at the same time connected with Santa Cruz de Tenerife by Tranvia de Tenerife.

In the southern part of Madrid, Spain. You’ll find a town named Parla which is also counted as a municipality of Madrid. The tram system here got 15 stations and it was opened in 2007.

Almost no tourists know about its existence as there isn’t any info mentioned about it in this Wikipedia article that we found at the time of writing this article. You find this circle tram network approximately 20km from Madrid. With a population of around 264,182 population, it is nice that this area finally got a transit option.

You can reach the place with a C4 local train that stops at Parla Centro Bulevar Norte.  The total length of this tram line is 8.2km and it runs in the circle in both directions.

To get here you need a B2 Zone ticket that is valid in the area. Also, you can use a regional travel pass. The tickets you have purchased are also compatible with the bus lines in the Parla area.

If you know of more interesting places. Please write to us by using our Contact page. We have got many requests about unique transit cities and so we have made this guide for you. Like us! Share us! and thanks for reading Distrita.